This article contains spoilers for the entire series.​

“Sallie Daera. I don’t know who she is or was, but I was told to give her name to any Blue who came around looking lost, so to speak. You may not be one of the sisters, but you carry your nose high enough for one, so there it is. Sallie Daera. Make of it what you will.”

–Duranda Tharne to Siuan Sanche, The Fires of Heaven, Chapter 26​

Although Deane Aryman’s name appears on only four occasions in The Wheel of Time proper, in many ways her memory provides an indelible backdrop to the White Tower rebellion, serving as a north star of sorts to those set adrift in the sudden wake of Siuan’s deposal. Referred to in cipher as “Sallie Daera,” it is Deane’s hometown of Salidar that comes to stand as both a refuge and a symbol of resistance at one of the most critical points in the series.

Born in Salidar in 920 FY, some twenty years before the rise of Artur Hawkwing, Deane Aryman began her training in the White Tower around the age of sixteen. Raised to the shawl after nine years and to the Amyrlin Seat merely fifty years after that, Deane remains one of the most famous Amyrlins to be selected from the Blue Ajah. A thousand years after her death, she is remembered for guiding the Tower following Bonwhin Meraighdin’s disastrous efforts to manipulate Artur Hawkwing (LoC, Glossary; Companion).

In large part, Salidar is chosen as a gathering place by the rebel Aes Sedai for practical reasons; abandoned and located but a mile from the Amadician border, Siuan notes that it was “one of the last places anyone would look for Aes Sedai short of Amadicia itself” (TFoH, Ch. 11). It is not difficult, however, to imagine that Deane herself in some way embodies the hopes of the rebels. Although Siuan claims that “Only a Blue would know, or even suspect” that “Sallie Daera” refers to the “Birthplace of Deane Aryman” (TFoH, Ch. 11), memory and admiration of Deane’s reign are certainly not confined to the Blue Ajah. Hoping that the rebels have already chosen “Someone very strong, in the Power and in her heart” to be their Amyrlin, Merana thinks to herself that “It would take another Deane […] to make them once more what they had been” (LoC, Ch. 49). 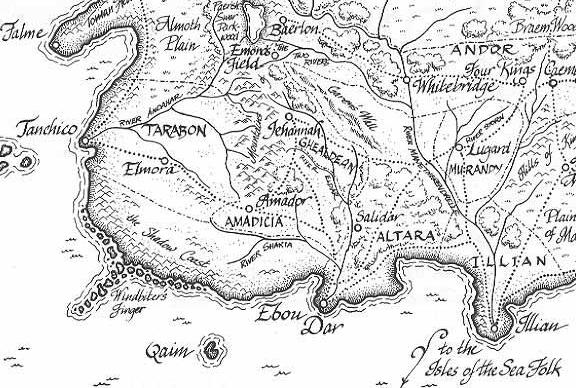 Map by Ellisa Mitchell​
To many amongst the rebel Aes Sedai, Egwene does not appear likely to live up to Deane’s legacy—at least initially. Chosen as a puppet and a figurehead, Egwene is meant to be guided rather than to lead. Nonetheless, we can see a number of connections between the two women, which is narratively fitting given that Egwene is raised to the Amyrlin Seat in the town of Deane’s birth. An obvious parallel, of course, lies in the salvific arc of each woman’s reign: where Deane sets the Tower to rights in the aftermath of Bonwhin’s mistakes, Egwene does the same in the wake of Elaida’s. There are, however, other points of interest as well. Both Deane and Egwene are, at the time of their raising, the youngest Amyrlin to ever wear the stole—a distinction shared also by Siuan. Furthermore, both are linked in different ways to historically important sieges of Tar Valon. Deane is (perhaps wrongly) credited with ending the twenty-year siege begun by Artur Hawkwing.[1] Egwene, meanwhile, both begins and ends the siege enacted by the rebel Aes Sedai.

Ultimately, Deane’s untimely death in 1084 FY reflects one of the major themes of The Wheel of Time: that chance, for good or bad, can change the course of destiny. At the age of approximately 164, Deane took a fatal fall from her horse; she had been on the brink of solidifying the White Tower’s leadership over the land, a goal that her successor, Selame Necoine, was unable to realize. While Deane did a great deal to rebuild the influence of the Tower over the course of the Hundred Years War, in the end one of her biggest potential achievements was cut short by a tragic accident.

[1]The World of Robert Jordan’s ‘The Wheel of Time’ states that it was actually Ishara, the first Queen of Andor, who convinced Souran Maravaile to lift the siege; Maravaile was not only one of Hawkwing’s generals, but Ishara’s husband. Deane Aryman, however, has long received this credit and is known to have “met with him [Maravaile] and made serious attempts to undo the damage Bonwhin had done by attempting to control Artur Hawkwing” (Ch. 13).

Atarah al'Norahn is an Aes Sedai of the Blue Ajah and a writer for the Tar Valon Times. She lives in Winnipeg, Canada and is completing a PhD in English Literature.